Pictures in Your Mind

ProSieben ensures that visually stunning shows such as “The Masked Singer,” which is all about optics, become just as entertaining for blind and visually impaired people as for all other viewers. A special app is used to describe exactly what is currently being shown on-screen, creating accessible television for everyone.

Last year, ProSieben was the first private broadcaster to offer live audio description. One of the people responsible was Jeannette Diem, Senior Manager Content Acquisitions Dubbing & Material. She has been championing ProSiebenSat.1’s accessible offerings for years and is in charge of dubbing shows as well as subtitles and audio description. Why is accessible TV so relevant, and what makes the audio description of “The Masked Singer” particularly special? She spoke about this with Benedikt Hahn, audio describer at AUDIO2, a provider of accessible solutions for film and television productions.

For years, Jeannette and her colleagues have been advocating for the broadcasting group’s accessible offering. Nowadays, ProSieben broadcasts an average of 20 programs with subtitles on a daily basis. Since 2019, the station has also been offering live audio descriptions for its successful formats "Germany's next Topmodel" and "The Masked Singer."

The media is an important part of our society. It offers us not only information but also topics of conversation. 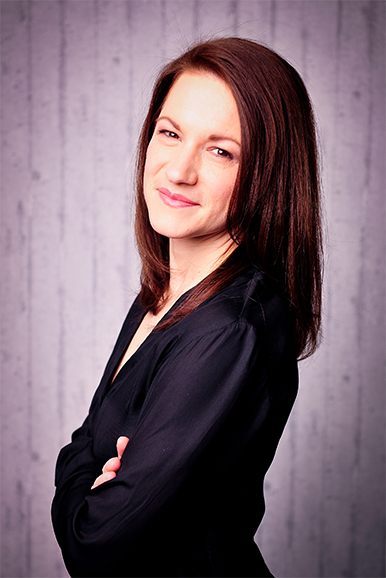 How long has ProSiebenSat.1 been offering audio description, and how did that come about?

Jeannette Diem: Accessibility has been a topic within the broadcasting group since the early days. Back in 2000, we introduced the first subtitles, and in the course of the years, we have continued to expand our offerings for people with hearing impairment in terms of both quality and quantity. Last year, we subtitled an average of 22% of our shows for deaf people. But of course we would like to give all people with disabilities the opportunity to access our content, including blind people. In 2019, we therefore consulted with associations of the blind. At this particular time, our hit show “Germany’s next Topmodel” was being broadcast on ProSieben, and we were wondering: why not broadcast the final with audio description for blind and visually impaired people?

What is audio description?

Was it easy to, just like that, put this plan into action?

Together with our partner AUDIO2, we rapidly found a solution to provide audio description for our blind and visually impaired audience via an app. This meant that ProSieben was the first private station to offer live audio description last year: for the grande finale of GNTM as well as for the entire first season of “The Masked Singer.” We continued to offer this service for the new seasons of both shows in 2020. It is very simple to use via the ProSieben Live Audio app.

Benedikt, you and your colleagues from AUDIO2 provided the audio description for the first and second seasons of “The Masked Singer.” What makes working on this show so special?

“The Masked Singer” is a lavishly produced live show, full of spectacular images, which of course has primarily to do with the flamboyant costumes. We describe them live for our blind and visually impaired audience, just like the pre-filmed intros and everything else happening in the show. The challenge is that we do not know what is going to happen before broadcast. Our job is to sense the perfect moment for a description during the live show. 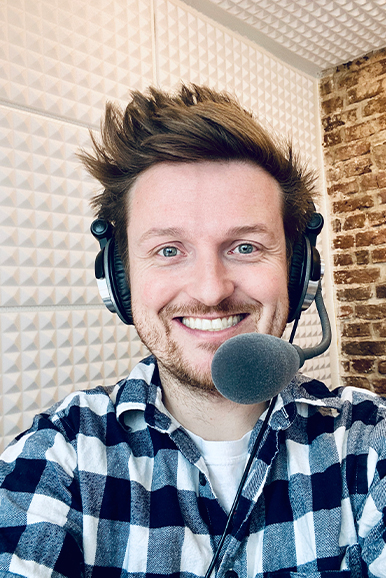 In his home studio in Cologne, Benedikt described the high-end costumes of the second season of "The Masked Singer."

As an actor and audio describer, Benedikt is not only on screen or on stage across the country: He also lends his voice to foreign-language actors and characters, narrates programs, or is responsible for the audio description of major TV shows.

With our type of presentation, we are trying to provide lively descriptions for our listeners.

What challenges did you have to overcome when providing audio description for “The Masked Singer”?

Benedikt Hahn: It is always about describing both the general impression and the details, without cross-talking the singing or Matthias Opdenhövel’s important presenting parts. After all, the show clearly emphasizes the voices of the celebrities, and everyone is trying to guess is the people behind the masks. Our descriptions are therefore minimal and carefully timed so as not to interrupt the show itself. We always have to weigh up what description could be necessary for blind or visually impaired people to obtain important information that they would miss otherwise. With our type of presentation, we are trying to provide lively descriptions for our listeners. This demands a great deal of concentration and is exhausting. Therefore, there are always two of us describing a live show, and we are taking turns.

Do you prepare for the shows in a particular way?

Benedikt Hahn: Not even we know which celebrities are hidden behind the masks, and of course we join in the guessing. In advance, we look closely at photos of the costumes, for instance, and think about how we can describe them for our audience in the best way possible. By focusing on certain details, we can give blind and visually impaired fans an idea of the costumes, for example the chameleon’s two-toned sequins or the myriad flowers on the hare’s dress. But most of our descriptions are created in the moment: we jump in at the deep end and describe the events as they happen.

Why is it so important to offer audio description for major live shows?

Jeannette Diem: The media is an important part of our society. It offers us not only information but also topics of conversation. We are delighted that blind and visually impaired people can follow a visually stunning show like “The Masked Singer” with great interest and without major restrictions. The positive feedback motivates me and my two again and again in creating accessible content.

Benedikt Hahn: I agree completely with Jeannette. I think it’s great that this show, this TV event, offers live audio description. We receive feedback on a regular basis from blind and visually impaired people. One of them recently told me that they actually one another: “Did you see ‘The Masked Singer’ yesterday?” They use these exact words, they are able to join in the conversation like all other viewers and they talk about the costumes. Without live audio description, “The Masked Singer” would be just another music show for this community. The costumes, the atmosphere, the intricate details – they would miss out on all of this. Instead, they can participate in the discussion about the pink monster or the fluff ball. More inclusion. More accessibility for all. That’s great!

Moreover, abm, Bayerische Medien Technik GmbH (bmt) and Institut für Rundfunktechnik (IRT) have jointly developed and are implementing the pilot project “Television for All – Fully Inclusive with HbbTV”. As part of the collaboration between abm and ProSiebenSat.1, abm’s media library was integrated into the SAT.1 GOLD and Kabel Eins stations’ HbbTV offering this year. “Challenge” is now completely accessible, i.e. it is offered with subtitles, audio description, a sign-language interpreter, and simple language and is therefore the first fully inclusive series!

“The astronaut claps his hands; a security guard stands behind him, joined by another wearing sunglasses. They salute each other. […] A bald and bearded security guard presumably opens a fastener on the astronaut’s chin. He stands with his back to the audience. […]. Now the helmet, set with hundreds of rhinestones, is lifted. A head appears, covered in a white cap. This is also removed – the security guard is still at it, fiddling at the back of the astronaut’s head. And he is free! Close-cropped hair, blond hair. He kneels – still with his back to the audience – strokes his head … and it’s Max Mutzke!”