“Don’t hate me. Celebrate me!“

“Queen of Drags”, aired on ProSieben in 2019, is the first prime time drag queen show on German television. This is a TV format that makes clear once again that television has the opportunity and the privilege to move people – as a reflection of a pluralistic society, which still has some catching up to do when it comes to tolerance, even in the 21st century; as a clear signal against hate speech and discrimination; and as a creative source of inspiration for new things. What this needs is courage on the part of makers and audiences, a show concept that entertains and informs, and a focus on diversity and respect.

Prejudice is a tricky subject. It stereotypes, simplifies. It is widespread and persistent. It is part of everyday life. We often nurture and combat at it in equal measure. Everyone is prejudiced, except yourself – or maybe you are? Episode 1 of “Queen of Drags”: A look at the large “Glam Space” behind the show’s stage. In the hectic preparations for the show, drag queen Katy Bähm spills a tin of glitter powder – starting an argument with rival Aria Addams. A catfight over a bit of glitter? It’s fellow competitor Candy Crash who defuses the situation in seconds, with a wink: “I was sure there would be major drama between us drag queens. But not over glitter.”

Moments like these have stuck in the memory for Christiane Heinemann. As Managing Director of Redseven Entertainment, the production company behind “Queen of Drags,” she was on set for filming in Los Angeles in late summer 2019. “It quickly became clear to us that all viewers have stereotypes in their minds. But we have the chance to use the show to reveal what lies behind these stereotypes. Therefore, we depict prejudices to a certain extent, in order to break them down in the next moment, and to show that there is often much more behind the facade than people think.”

What does “drag” mean?

There are various theories about the origin of the term “drag”: It could be an acronym for “dressed resembling a girl.” Alternatively, the term could come from the theater scene of the late 19th century, when “to drag” referred to long skirts being dragged along the ground. In Germany, the Anglicism “drag” began replacing the German term “transvestism” from the beginning of the 1990s. In contrast to transvestism, drag highlights the political intentions. “Drag queens” usually refers to people who identify as male, when they put on clothing and roles that, according to the heterosexual norm, are meant for the other gender, and significantly overdo it. By extremely exaggerating the gender norms and roles shown in their optics and behavior, drag queens call these very norms into question. Drag queens are therefore part of a community grouped under the acronym LGBTIQ* (lesbian, gay, bisexual, transgender, intersex, queer). The term as a whole and in its constituent parts stands for people who depart from the heterosexual norm due to their gender identity, sexual orientation, or physical body.

Some viewers thought they already knew everything about drag before the end of the first show. While the episode aired in November 2019, the Internet quickly revealed its ugliest side. Deeply entrenched prejudices were expressed in homophobic hate comments: “Can you take this stupid fairy ball off the schedules?” one user commented on Facebook. “Disgusting freak show,” wrote another. “Now these mentally ill fags are getting airtime.” Even the ProSieben viewer editorial team was swamped with hate-filled comments: “How can you show this brainless shit with (…) idiots who don’t know what they are?” 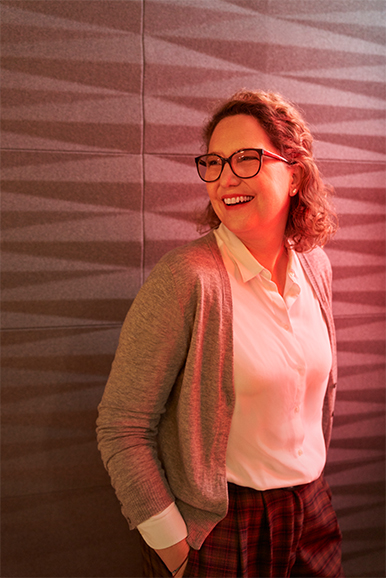 In addition to her role as Managing Director, ProSieben’s former head of entertainment also produces shows of her own. Together with Executive Producers Alex Koch and Susan Schadwinkel and their colleagues at ProSieben, she helped to develop the “Queen of Drags” concept.

thanks to the large reach that the best broadcast slot of the day gives us, we can target the focus on new issues that might play out outside the real lives of some viewers.

It’s social media storms like this that highlight the necessity and intention of the new ProSieben show “Queen of Drags”: The show seeks to educate and entertain. Over six episodes, ten drag artists compete for the title of best drag queen. The cameras follow them as they live together in the villa and practice for the shows, which have a different theme every week. Their performances are judged by a panel comprising Heidi Klum, Bill Kaulitz, and Conchita Wurst. “We are giving the drag artists a platform, telling their deeply personal stories, shining a light on their backgrounds – and have the amazing show elements at the end of every episode,” says Heinemann, explaining the mix of documentary, reality TV, and talent show. Things aren’t always what they seem at first glance – the show does not eschew this idea as such: “Who says that entertainment cannot also be education?”

Who says that entertainment cannot also be education?

The team from Redseven and ProSieben followed this approach consistently from the very first concept phase. “Above all, it required courage. We wanted to bring the drag queens out of their niche and allow them to shine in prime time,” says Elisabeth Sofeso, the broadcaster’s Executive Producer of “Queen of Drags.” “It’s a good fit for us, for ProSieben, because it is new, different, and courageous.” The top priority is to make the drag show world of the stage, which is as extravagant and colorful as expected, relevant, and, as Sofeso puts it, “enduringly profound, by giving the people behind the characters space to tell their very emotional and personal stories. We wanted to depict our protagonists in all their facets as well as give them the big stage they deserve.” 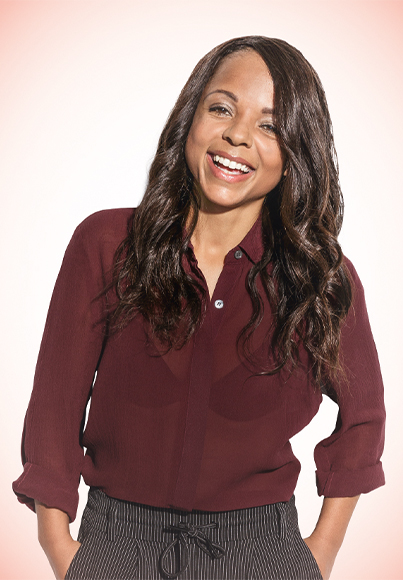 As Executive Producer at ProSieben, Elisabeth, known as Lizi, is responsible for the content of the format. She acts as an interface between the broadcaster and producers and has accompanied “Queen of Drags” together with Executive Producer Stephan Hahn from the initial idea right through to broadcast. Lizi has worked closely with judge Heidi Klum on “Germany’s next Topmodel” for years: “Heidi is a big fan of the drag scene and was, like for GNTM, heavily involved in the development of the show.”

This ProSieben show is not the first time that drag culture has been part of German public life. Drag queens, such as Olivia Jones and Lilo Wanders, have long been part of the TV landscape in Germany. “But the topic remained on the margins, which is why we wanted to make the impressive world of drag queens tangible for audiences,” says Sofeso. What people think they know is often limited to reductive stereotypes: “Lots of people think it’s ‘just’ gay men who dress as women. However, a drag queen is not automatically homosexual. And drag queens don’t want to be women. It’s a sophisticated and multifaceted art form. We thus thought about how to get viewers interested in this topic in an entertaining way. The main show in prime time is intended to show what it means to be a drag queen, why our candidates have chosen this path, and how they live. Hardly anyone knows that there is much more behind it than a bit of fun and fancy dress – namely a culture all of its own, which involves messages that are relevant to society and deserves serious respect.”

The drag queens present these messages themselves in episode 4, talk about their motivation to participate in the show, problems with their sexuality, and experiences of marginalization and discrimination. Often in tears. And all united in the purpose of education. “A lot of bad things happen to us. Friends have been beaten up, spat at, threatened. Where I live, I could never walk down the street holding hands with a man,” says Aria Addams. Vava Vilde adds: “We can encourage others! I am on this show not just for myself, but for an entire community, and to shed light on things that receive too little attention.”

We can encourage others! I am on this show not just for myself, but for an entire community, and to shed light on things that receive too little attention.

Sofeso has long thought about the day that episode was filmed. “Even today, in a globalized world, respect and tolerance cannot be taken for granted. Unfortunately, the question of where you come from, who you love, or what you look like plays a role all too often. And as long as that is the case, we want to educate the public, in the hope that shows like ‘Queen of Drags’ will reach people and cause them to reflect.” It is becoming clear on social media that the show has been a help towards this goal. In line with queen Catherrine Leclery’s motto “don’t hate me, celebrate me!” hate comments have dropped into the background, crowded out by the oncoming “lovestorm”: “My dad just googled ‘drag queen’ for the first time. In this way, you have motivated at least one viewer to learn about and get interested in the topic,” wrote one Twitter user. Another wrote: “ten gay men are presented in #QueenofDrags as multi-dimensional human beings with strengths, weaknesses, talents, and problems. (…) That’s a fucking big deal.” And: “Outing, homosexual partnerships, drag … I love that these issues are being talked about in prime time.”

For Heinemann, too, the prime time slot does not automatically mean that the issue is already an accepted part of society. “The online hate comments alone made it clear that there is still a lot that has to change. But thanks to the large reach that the best broadcast slot of the day gives us, we can target the focus on new issues that might play out outside the real lives of some viewers. For example, we promote tolerance and openness, educate and take a stand against prejudice, so that diversity does not just take place on screen, but is also lived in reality.”

It's all in the mix: ProSiebenSat.1 values the diversity of individual characteristics, experience, and expertise that its employees and managers contribute to the Company, and regards diversity as an important success factor for the Group’s development. It is part of our identity not only as a media group, but also as an employer, that we seek to create conditions in the personnel arena that promote diversity in the workforce and accommodate the individual interests of our employees. Against this backdrop, ProSiebenSat.1 Group signed the Diversity Charter ("Charta der Vielfalt") back in 2014. This highlights our commitment to creating a working environment free from prejudice and exclusion. We hire employees at all hierarchical levels solely based on objective criteria and promote them based on their skills and expertise alone. Factors such as age, disability, ethnic background and nationality, sex and gender identity, religion and ideology, and sexual orientation do not play a role. We draw further attention to the topic of diversity with internal initiatives and campaigns, including for Diversity Day and Pride Week. Since spring 2020, some employees have formed an LGBTIQ+ group in order to raise awareness of the topic and establish a network for interested parties within the Company.